A Boathouse Sermon for today

The other morning at O'Dark Hundred I heard a most inspiring sermon. At church, I am the one "up front" watching latecomers slip quietly into the pews.  At the church of rowing, I sat on an erg and listened to what was being proclaimed behind me. And I came away and am still thinking about it days later. The mark of a good sermon? The people remember and ponder it.

The art of preaching is one which is taught and yet, at the same time, is learned as the preacher hones her or his craft. The most well-known and popular aphorism about preaching is what Francis of Assisi advised: "preach the Gospel at all times. If necessary, use words." So we who have the privilege to preach in a church are constantly on the lookout for the places in our lives that we see Love being proclaimed. I saw it the other day on the ergs.

The sermon I heard was given by one of our great Marin Rowing coaches, Marc, to his team. They had just finished an intense twenty minute erg piece: basically get on that contraption at your gym and haul ass as hard as you can for twenty minutes, neither holding anything back nor giving too much too soon and losing everything. At the end, people were gasping for air, shaky after their full effort.  Marc gave the congregation (his team) some time to recover, as he himself was recovering; he also did the piece.

He then spoke to them (us...that is the thing about sermons, you just never know WHO is in the congregation...sitting around the edges!) about getting through that ordeal. About the fears that keep us from pursuing that which we say we want to pursue. He shared some of his own fears, gave them some strategies for making it through in one piece.  And he thanked them, his team, for keeping him going. He confessed that he could not have done the piece if not for the people around him.

Marc and I talked briefly about his sermon and I thanked him. He told me he would be interested to know how I would interpret rowing for church. What I took that to mean was, how do we understand the focus, the center?

The teacher and activist Parker Palmer, author and Quaker theologian, speaks about gathering around The Great Thing. In the church gathering, then, The Great Thing is God: the Holy, the More, the One, Source. At the church of rowing, my experience is that we call The Great Thing "Swing";  that Moment amidst the pain and the doubt and the fear and the effort, a glimpse of Unity, Oneness.

The question is, are these two Great Things actually the same thing? That is one of the gifts of being a Rev who Rows, the chance to ponder that, and I do.

Fast forward to today. We are witnessing the shutdown of our Federal government after a failure of our leadership in Washington. It strikes me today that the very thing Marc was preaching - how to move through fear to accomplish that which we say we want to accomplish, is at the very heart of the failure of our leaders.  And so I pray for them today, angry, sad and disappointed as I am. That they find a way to shed their fears and find a way to listen deeply to that which will help them find a way through.

Finally, stream of consciousness connection (since what I am actually doing is working on my own sermon for a future date!) I have just finished reading a very important and powerful book titled Insurrection, by Peter Rollins. The subtitle is "to believe is human, to doubt divine."  One of his conclusions is that a life lived in Resurrection is a life of violence: not violence directed against individuals, but "a battle...that sets itself against systems that oppress people, preventing their development into full responsible, ethical individuals. It is this direct attack against prevailing structures, such as ineffective school systems or unjust legal structures, that can facilitate real change in society". That is what it feels like today, that we are in a battle in all manner of ways to dismantle unjust structures in order to facilitate important social change.

Finally, finally, here is an image I created a long time ago that speaks to me about all of this. One lonely pair of teva sandals, left on the dock, as the crew, multiple people, push their boat away from the dock to work as one. Leave ego behind to work as one. It makes all the difference. 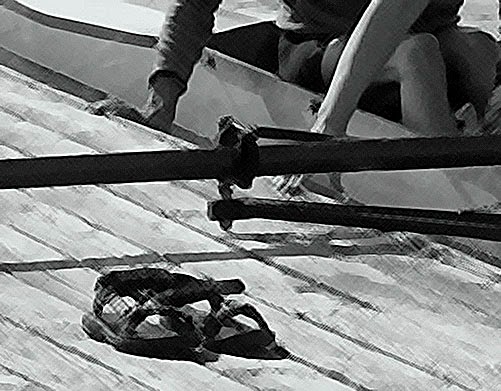